Put your soul into it 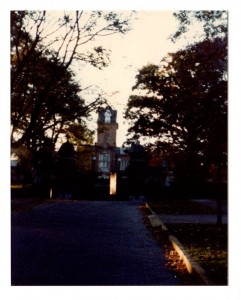 It’s late on a Friday just at the time when afternoon slips out of its workclothes and pulls on something a bit more comfortable for evening. We’re walking down College Street in Bethany, West Virginia. We walk past the church and down the road until we turn onto Richardson Street. There’s Jim and Marjorie Carty out on their front porch having a quiet drink and watching the world go by. We smile, wave and keep on walking.

And that’s when it hits us. This incredible smell. It smells of politics, culture, of fabulously challenging conversations, and of warmth on a cool autumn day. It smells like Montreal or Brooklyn or wherever you call home. Something wondrous is cooking. We climb the stairs into the Beckers’ home knowing Saundra has poured her soul into a pot with the rest of the ingredients and whatever is served on the table will be equal parts love and delicious.

There are dogs snurfling around at our feet and comfortable chairs and a rotating cast of eclectic characters who are the Friday night irregulars at the Becker house. And there’s the kitchen. It’s an insane, impossibly small exercise in creative chaos. There’s a table in there somewhere but it’s buried in pots, pans, bottles, bags and other essential gear. And in the midst of it all, there’s Saundra. She’s got flour on her shirt and she’s talking loudly. She gives us a hug as a welcome and then, quick as a potato latke sliding from fry pan to plate, launches into a totally politically incorrect and sexually explicit critique of political opposition to proper funding for special needs education.

Stan is rolling with it. He’s sitting at the head of the table and he’s keeping the conversation going while ensuring the other guests don’t follow their impulse to run screaming for the door. Saundra’s not taking any prisoners tonight. She’s fired up. She’s adding context to statistics while dishing out the best cholent this side of Jerusalem. Cholent is ‘a savory stew traditionally served for Saturday [Shabbat] lunch.’ Saundra’s cholent could have its own chapter in Zen & The Art of Jewish Cooking. She’s talking politics and telling us what’s for dessert in the same breath. That’s the thing with Friday night dinner at the Beckers. There’s sweetness, spice, and serious insight – it’s like being in the front row at a catered political leadership debate.

Saundra’s cooking bible is ‘Love and Knishes’ and she dips into it often. She also experiments with other recipes and creates dishes that are somehow always reminscent of a Jewish home while tasting more like they were served at an upscale Asian fusion restaurant – except, of course, none of those restos can offer the unique ambience of Friday night dinner at the Beckers. After noshing on frighteningly excellent chocolate chip cookies, we push back from the table and take our leave – begging off from after-dinner conversation because we’ve got an important project due on Monday and we’re miles behind. The door closes behind us as we walk down the stairs but the smell, that delicious smell, lingers on well into the cool night air.

Saundra is no longer with us.

I remember visiting with Stan and being overwhelmed by the sense of loss while standing in the kitchen-gone-quiet. It was still early days without Saundra and Stan was trying to find his way in the kitchen. I remember showing him how to craft a roots veggie stew – first you saute the garlic in oil, and then you add the sweet potato… and everything Saundra had taught me years before still made a bit of magic in that pot.

She put her soul into everything and memories of those meals and those conversations will live forever.

Update: February 2014 – We lost Stan a couple of weeks ago. A chapter closes.

PostScript: As I put this piece together, I wrote back and forth to Jonathan Becker who now lives in Israel. I had told him I had wanted to write a piece about the first-ever Wisconsin-meets-West-Virginia-Deli that was the kitchen and diningroom in his family’s home.

“You’re right about one thing- everything flowed from that kitchen, including my dad’s teaching, and my own explorations, and my sister’s, and every amazing conversation I was privy to in our living room.

“One thing I wanted to mention- in my later studies I learned about Cohen/Levi/yIsrael. Both my mom and my dad were Levites. The Levites in ancient times were like a “buffer” between yisrael (the common people) and the Cohanim (the priests, who offered up the peoples’ gifts to god). Now, the temple, where the Cohanim and Levites worked together, was, in many ways, a huge kitchen. It was barbecue and pancakes all day long. I know this is a simplistic way of looking at it, but I found it interesting that the holiest place in Judaism (the temple) was, in large part, just a huge kitchen, where everyone ate and was thankful.”

“Mom used to make her own gefilte fish – from scratch, in a blender, etc. – and stuffed cabbage leaves, a Polish/Russian/Jewish delicacy. The thing about both of these things is – you don’t want to be in the house while they are being made. The stink is incredible. The final product, of course, was always extremely tasty. But Mom used to warn me: “I’m making gefilte fish today, maybe you want to go out on the Weimer Nature Trail for a few hours?” Which I was happy to do, with gratitude, and come home when it was done, with a bouquet of wild violets for her if the season was right.

“Point being – to be a truly great cook, you can’t be squeamish, and to be a truly righteous person, you must recognize that others might be. This strikes me as a powerful point, somehow.”

NB: Big Medicine is my nod of respect to a First Nations expression that, roughly translated, means the right people working together at the right time will be Big Medicine. I’ve been saying ‘Be well. Practice big medicine’ for as long as I can remember. It is my own very personal version of ‘Sawu Bona’, the Zulu greeting which means ‘I see you’… I see all of you, I see your good works, I see the difference you are making in the world.